A “public sphere” includes all the venues through which a community discusses important issues. 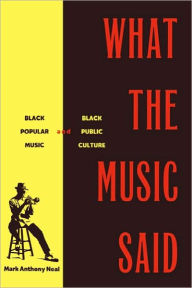 In this assignment we begin the first of our three textbooks, Mark Anthony Neal’s What the Music Said.

Note that this guide is not meant to replace careful study of the entire assigned reading. Instead, this guide highlights some of the important ideas and information in Neal’s text. To do well on our tests, quizzes, and class discussions, you will need a thorough knowledge of the entire reading.

The introduction’s title is an important summary of Neal’s argument. It is “Toward a Black Public: Movement, Markets, and Moderns.” Each of these terms is chosen with care; here is a summary of their implications:

Toward a Black Public
Neal traces the development of a self-conscious community that creates and cultivates venues through which it can communicate about issues important to the group.
Movement
Neal cites Cornell West, who argues that the Great Migration from South to North had a greater impact on 20th Century Black life than did even important themes like integration or separation (12-13).
Markets
Commodification–the conversion of musical styles and other Black cultural products into salable commodities–is central to the story Neal traces here.
Moderns
Through the processes of migration and consumption, Neal argues, African American culture became recognizably modern.

This introduction sets the stage for the following chapters. Chapter 1 will begin in the 1950s, and the rest of the book continues through the era of hip-hop. In this introduction, Neal focuses on the earlier history, and he divides it into five sections, with subheadings that signal the beginning of each section.

1
Neal is a social scientist, and he uses the term “public” in a specialized way. It’s tied to a lot of writing by sociologists about the idea of a “public sphere”: the spaces in which people gather together to discuss important issues within their community. In this sense, a “public” is more than just a collection of individuals; it’s more like a group of people who are conscious of themselves as a community that thinks, feels, and acts in parallel ways. By “towards a Black public,” Neal is pointing us toward the history of its formation among African Americans.
2
The slaveholders who depended on the unpaid labor of Black Americans worked hard to prevent the formation of a Black public. Quite rightly, the slaveholders felt threatened by any sign of critique, community building, or collective action. As a result, African Americans quickly developed “hidden transcripts” that allowed them to communicate under the noses of their oppressors. Neal cites the classic example of the African American spirituals.
Bernice Johnson Reagon discusses spirituals also, but she stresses that the songs were used for much more than simply to hide escape plots from slavers. Instead, Reagon argues, the spirituals were much more flexible and more powerful than this single interpretation suggests. They offered support and sustenance in many areas of life, including but not limited to resistance. In other words, Reagon only partly agrees with the interpretation of the spirituals that Neal summarizes here.
3
Here Neal begins his five-part survey of the origins of a public sphere among Africans and their descendants in America. As the subheading on this page indicates, he begins with “The Roots and Early Manifestations of the Black Public Sphere.” Three key venues are discussed: the Black church, the jook joint, and the Black press.
5
The church is “the quintessential institution of the Black Public Sphere…” (5).
6
Despite its importance, the black church is limited in its representation of the larger community, because it “priviledged the sensibilities of the liberal bourgeois…” (6). The Bourgeoisie is a social class. It consists of people who are relatively wealthy and culturally conservative.
Juke-joint: This space for socializing and entertainment is often thought of as a kind of opposite of the church (6-7). It is “very much in contest with the black church as a vehicle for black expression” (6-7).
9
Despite the importance of the church and the juke joint, Neal argues that “the radical democratic tradition” found its most vital expression in a “cadre of black journals and newspapers…” (9).
The second period of Neal’s survey starts here, “Post-Reconstruction and Black Public Life.” The 1880s through the 1920s were a period of renewed violence and brutality, as whites in the North and South sought to undermine the gains made just after the Civil War.
11
Section 3, “Migration, Industrialization, and the Black Public Sphere.”
12
Neal here introduces an important concept that he draws from Farah Jasmine Griffin, “South in the city.” As migrants from the South built new lives and new communities in the urban North, they both held onto and morphed southern cultural traditions.
14
“Creolization” is Neal’s term for “the interaction and exchange of northern and southern sensibilities” (14-15). The development of “urban blues” out of the earlier “Delta blues” is a classic example of this process.
16
Section 4, “Technology, Mass Markets, and the Black Public Sphere.” The invention of sound recording and the development of a recorded music industry had complex effects on black culture. It began what Neal calls a “tumultuous marriage between black cultural production and mass consumerism” (17).
17
As a result of migration, Black people and communities were increasingly dispersed. Increasingly, therefore, the Public Sphere depended on commercial and technological arteries that enabled circulation of cultural products like sermons, ideas, songs, and styles. At first these arteries were newspapers, railroads, and Pullman porters, but in the late 1920s “America witnessed the rise of the radio as a major artery of information and entertainment” (17).
18
Neal cites Ewen and Ewen: “[By] the early twentieth century the double prong of “Americanization”–mass production and mass consumption–had dramatically altered the social landscape of American life” (Neal 18). For African Americans this included buying their entertainment in the marketplace (e.g. movies and recorded music) rather than making it within their communities. And as the white-controlled record industry discovered and exploited Black musical culture, the community increasingly lost control over that culture (18-19).
19
Section 5, “The Black Public at War: Bebop and Executive Order 8802.” The war is of course World War II, and the era discussed here is the 1940s. The most popular music of the time was swing, a simplified, radio-friendly, and bleached version of the jazz pioneered by Black artists in earlier decades. Bebop emerged in New York, developed by a group of young artists who rejected the limitations of swing.
21
Neal cites Eric Lott, who argues that Bebop began as the musical expression of political militancy, created and enjoyed far outside the (white) mass market. By the 1950s, however, Bebop had been thoroughly commodified, and its most enthusiastic audiences were “young white artists and intellectuals” (22).