Ron O’Neal’s portrayal of Youngblood Priest creates one of Blaxploitation’s most charismatic antiheroes. 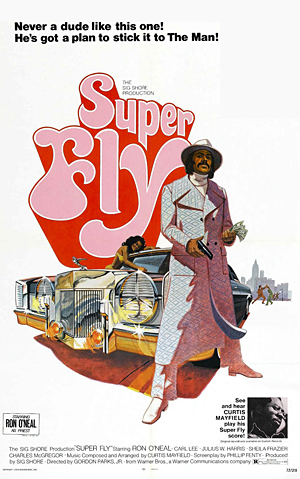 And as the assigned hip-hop songs indicate, Priest’s outlaw status is one of his most compelling characteristics. Even more than Shaft, then, Superfly set the terms for Blaxploitation as a genre. Although John Shaft was a police officer, after Superfly the vast majority of Blaxploitation protagonists were outlaws of one kind or another.

In BaadAsssss Cinema, critic Elvis Mitchell makes an important point about the conflict between the film and its soundtrack:

It’s a movie about a guy who wants to make a big dope score, and the soundtrack refutes every single thing in the movie….Everything that Curtis Mayfield is doing in the soundtrack….is saying “No” in thunder to everything this movie represents.